Shone, Shined, And A Digression Re Dictionaries

This post is getting so out-of-hand long that I'm going to put in section headings. You can take the academic to the blog, but you can't make her brief.

Tracing the history of pronunciations is difficult, but one of the ways it's done is to look at rhymes in poetry. So if you're lucky enough to find a shone at the end of a line, you might learn something. What it looks like to me is that the pronunciation of the word has only gradually come to be uniform (if indeed it is) in the two countries.

So around the same time we have English Cowper saying shoan, Irishman-in-England elocutionist Sheridan saying shon and the rest of the Irish, as Sheridan would have it, saying shoon. It's in those kinds of instances that I'm not too surprised to find that American and British pronunciation have standardi{s/z}ed in different directions.

What about shined? The 'authorities' will tell you that the past form of the intransitive verb is shone (The sun shone bright) but the transitive verb is shined (She shined her shoes). But there's plenty of evidence that people have been saying both shined and shone for the intransitive for a long time-- in the simple past tense (It shone/shined bright) more than the participle (It has shone/shined bright). Motivated Grammar has a nice blog post on this, so I won't repeat all the history.  What I will say is that America has moved toward shined more decisively than the UK has. I searched for shined bright and shone bright in the Corpus of Global Web-Based English (GloWBE), and found that BrE preferred shone 20:1, whereas AmE had almost as many shineds (4) as shones (5).

and a digression on dictionaries

Back to the tweets that started this all:
No voice divine the storm allayed, No light propitious shone; When, snatched from all effectual aid, We perished, each alone: - See more at: http://www.poets.org/viewmedia.php/prmMID/19364#sthash.PqsOl5fd.dpuf 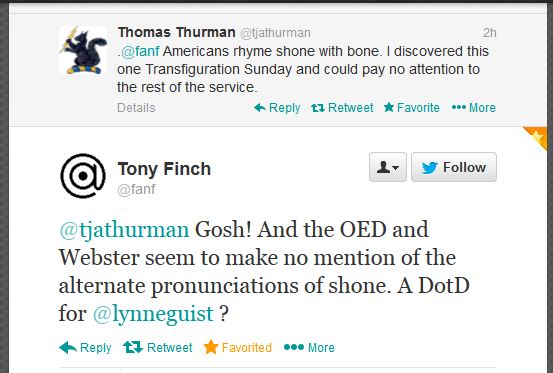 I was interested in the implication that dictionaries are not covering the pronunciations very well. So, I (BrE) had/(AmE) took a look.

In the 'covers only their own nation's pronunciation' camp, we have:
UK: The Oxford English Dictionary ("Pa. tense and pple. shone /ʃɒn/") and  Chambers.
US:  American Heritage and New Oxford American Dictionary

In the 'provides no pronunciation guide for the past tense' category, we have:
UK: Oxford Dictionary of English.
US: n/a (but see below)

It's a bit weird for a UK dictionary not to list the pronunciation, since the UK pronunciation does not follow English spelling conventions; that is, the silent E (my daughter's learning to call it 'bossy E' at school) after a single consonant should signal that the preceding vowel is 'long'. Such irregular pronunciations are the kind of thing that people need explicit information about. Shone here is like another -one verb form gone, which rhymes with 'on' in both AmE and BrE. But we can't really call that a regular pattern: they come from very different base verbs (go, shine), and while shone is a simple past tense form, gone is only a participle (which is to say; The sun shone but it didn't gone). [And then there's done, which has another vowel sound altogether.] The only other '-one' word I can think of with an 'on' pronunciation is scone, and that's only for about 2/3 of British speakers. An aberrant spelling-pronunciation association like that should really be mentioned in a dictionary.

And in the 'helpfully provides both and tells you the difference' category, we have:
UK: Collins
US: Merriam-Webster and Random House (both the hard copy of RH Webster's College Dictionary and the version you can see at dictionary.com)

Contrary to my list above, @fanf in his tweet claims Webster makes no mention of it, and he's half right (assuming he was looking at Merriam-Webster; keep in mind that the Webster name is not a trademark, so anyone can use it).  M-W provides no pronunciation guidance on their page for shone, except to provide a list of rhyming words that starts with blown. But on their page for shine they give "\ˈshōn, especially Canada & British ˈshän\. The clickable audio file just gives the American pronunciation.

A central problem for lexicographers (dictionary writers) has always been: what to put in and what to leave out. The number of things one can say about a word has no real limits, and when one starts to take into consideration variant pronunciations, it could get ridiculous. This is less a problem in the electronic age than it was when one needed to keep dictionaries affordable (and liftable) in the printed form. So, print dictionaries tend to have entries for shone that just point you to shine. They don't tend to give pronunciations at such cross-references and they don't tend to spell out the pronunciation of every tensed form of every verb. In the electronic age, the limits on dictionary contents are more limited by labo(u)r costs and time than by space (although formatting a lot of information on the web in a user-friendly way is another problem), and so what we mostly have online are entries that were written and formatted in the days of print-only. So, I humbly point out irregular verb forms as things that might be afforded greater lexicographic attention in electronic dictionaries.

Something I'd like you to notice above is the range of variation in the dictionaries published by Oxford University Press. You might find the same for other publishers if you look. But the point I want to make here is: there is no such thing as the Dictionary and there is no such thing as the Oxford Dictionary. Every title and most every edition has different information. (I had a little rant about this at The Catalyst Club in November, and I'll be ranting about it again soon in The Skeptic.) So, if you don't find the information you need in one dictionary, look in another. If you don't understand one, try another.

Oxford (AmE baseball metaphor) steps up to the plate in their dictionary for learners. The Oxford Advanced Learner's Dictionary, like other learner-orient(at)ed dictionaries (Cambridge, Longman) has good recordings of both pronunciations.  (Macmillan is an odd one. You can't get to the pronunciation through the dictionary entry, but by googling 'Macmillan pronunciation shone' it takes you to an American pronunciation page; no equivalent page for British.) So another moral of the dictionary story: if you want clear information about your language, sometimes it's good to seek out the dictionaries for second-language learners.

and a bit of shameless self-promotion

Yes, it's been a long time since I've blogged. I've now declared Tuesday evenings "Blog Evenings", but that doesn't necessarily mean you'll see a weekly post here since (a) I'll be blogging for some other sites, and (b) long things like this take me more than an evening. But I'm hoping I'll at least have more posts here in spring than I had in autumn (my deadly semester).
But if you're interested in the kinds of things I do here, you may also be interested in some of the other ways that I'm doing those things.
Upcoming talks (all welcome; follow links for more info): 'The most acceptable hypocrisy'?  Polite words in the UK and US. 11 February: Language & Culture lecture series, University of Sussex. (Free)19 June: The Bedford Culture Club (which is not in Bedford, but in Horsham) (£10) How America Saved the English Language15 May: Reading Skeptics in the PubIn print:This year I'm writing a series of short pieces on British idioms for Focus magazine (for expats in the UK). Follow the link for more info. (The one with teacups on the cover also has a little linguistic autobiography of me.)  I'll also be writing for The Skeptic (at least once, maybe twice) this year.
In the classroom:Since GCSE/A-level students are typically too young for the pub-based talks I tend to do, I'm taking the material into English Language classrooms in southeastern England. (I'd be happy to take it further afield, but you'd have to pay for my travel!)  The first outing is to a sixth-form college in March, where we'll look (a bit!) at how American and British English got to be different, how they affect each other now, how this gets distorted in the media, as well as what it's like to do English Language/Linguistics (BrE) at university. So, teachers, let me know if this might interest you and your school/college (see email link in the right margin). Parents and students, let your teachers know. (And Americans, if you want translations for some of that educational jargon, see this old post.)