How am I avoiding marking/grading? Let me count the ways... Every time I finish a dissertation (which in AmE would be called a thesis, since it's an undergraduate piece; thesis and dissertation are used in reverse ways in BrE and AmE), I reward myself by going on-line. I probably read more on-line in my breaks than I read on paper in the work times (which means that the work times then extend through the night in order to stay on schedule). It's just so much more pleasant to read things that don't involve me having to make a formal judg(e)ment about them, which I'll later have to defend to someone else (second examiner, external examiner) and which I'll later have to live with--and live with the knowledge that someone else has to live with it. Don't get me wrong, I'm reading some really good work, but still I find the process emotionally draining.

But I've taken so many reading breaks that I've pretty much read the Internet now. Well, everything in my bookmarks, at least. So on this little dissertation break, I'll write instead of reading. Some time ago, I ripped the following bit from the Guardian, intending to write about it later. (Welcome to Later.) It's from a piece in the Work section on April Fool's pranks for the office:
Fill a desk with peanuts
According to the interweb, Americans love filling other people's desk drawers with peanuts. Handy for a snack--but read the small print. These are packing peanuts (whatever they are), and therefore not edible. Ridiculous! I'll be going straight for the dry-roasted KPs [a UK brand of peanut--L]. Open those drawers wide. [Vicky Frost, 'Pick a prank for the delayed April Fool', The Guardian, 31 Mar 2007]
Now, usually I will defend the Grauniad, but here I cannot. Vicky Frost, what kind of reporter are you if you have to write "whatever they are" in an article? (OK, an article that is meant to be taken as humorous, but an article nonetheless.) Research, darling, research! (This is starting to feel like marking/grading. Uh-oh.) 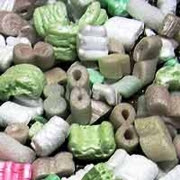 I was reminded to find and write about this item (in my staggering tower of things to write about) when BH and I walked by a packing supply shop/store the other day. Its sign advertised that it sells loosefill. Now, this is trade jargon (used in the US too), not BrE particularly, but it gave me cause to ask BH "Is that what you'd call packing peanuts?" and he guessed that it would be the name for them, though not a word that he'd necessarily use. He'd probably just call them annoying polystyrene (=AmE styrofoam) bits, or some such thing. (The photo of a particularly miscellaneous collection of packing peanuts comes from this blog.)

Packing peanuts are so-called in AmE because of their typical shape, like a whole peanut (i.e. with its shell on). Perhaps this name is not so transparent in BrE because the wor

d peanut is generally restricted to the shelled nuts (technically not nuts, but legumes; but since this isn't a botany blog, we'll just call them nuts). The shell-on version are sold as monkey nuts. (Stop that tittering!) Packing monkey nuts just doesn't have the same ring. (Photo 'borrowed' from this blog.)

Incidentally, I haven't run into cornstarch "peanuts" in the UK, though they are a wonderful invention, as they melt in water, making them completely biodegradable. Of course, it's the corn (BrE maize) growers of America, trying to find more things for us to do with corn/maize, that are behind this--so not terribly surprising that you don't find them here. (Just as you're more likely to find cars running on ethanol in the US.) Still, I really like them, as they're relatively guilt-free packaging.

P.S. I had a Canadian count double-whammy yesterday (at a Scrabble tournament--these happen often in Scrabble contexts). A player (whom I've known for a few years now) expressed surprise when I mentioned going to the US to see my family. She said "Oh, you're not Canadian?" And then added "I told A [another player from her town] that you were American, but he was so insistent that you were Canadian..." So, those are numbers 8 and 9 on the Canadian count.