Once upon a time, Grant Barrett forwarded to me the following item from issue 343 (29 March 2007) of Popbitch:
Confessions of an 80s pop fan
ishouldhaveknownbetter writes:
"I met Simon Le Bon at a house party. Everyone was playing it really cool so when he came to say goodbye I just exchanged air kisses, but then as he turned away for some reason I blurted out, 'Simon, I just want you to know that when I was younger I had a whole wall covered in posters of you at jaunty angles'. He went quiet. So I continued, 'And once I had a dream that you and Roger Taylor came to call for me on horses and then we all went out and played on the climbing frames.'
He left the party immediately."Grant thought a girl [*ahem*] of my generation would appreciate the Duran Duran reference (I never actually bought any of their albums, but did bother to have an opinion on which was the [orig. AmE] dreamiest). He also pointed out the non-Americanness of climbing frame, which he ably figured out is equivalent to (orig. AmE) monkey bars and/or (orig. AmE) jungle gym. Monkey bars is used in the UK now too, and in both dialects it can refer specifically to a contraption like the one below, from US company ChildLife, with a ladder-like structure several feet above the ground. But in both dialects monkey bars is also used more loosely sometimes to refer to any kind of structure built for children to climb on--i.e. a climbing frame/jungle gym.

Most of the other amusements on a playground have the same names in both dialects, although swing set, to refer to the apparatus involving swings and the frame that they're suspended from, seems to be more popular AmE. Better Half says he'd just call the whole apparatus swings [although the OED does not mark swing set as AmE--see comments]. See-saws are see-saws, but teeter-totter is a dialectal AmE word for the same thing. (I grew up with both terms.)

And those round things that one kid pushes (a)round and (a)round while the kids on it get sick--well, as a child in New York State we called these things merry-go-rounds or roundabouts, but the American Heritage tells me that roundabout in this meaning is 'chiefly' BrE. As a child, I preferred roundabout, because I liked to reserve merry-go-round for the kind of powered thing with horses, also known as a carousel. (Let's ignore the traffic-related meaning of roundabout. That deserves its own post.) Oxford dictionaries like to claim that carousel is spelt carrousel in AmE ('frequently' in OED2, but simply presented as the AmE spelling in my [admittedly out-of-date] Concise). I don't recall seeing it spelt that way anywhere but in an Oxford Dictionary--and, now that I've looked, in the American Heritage, which lists it as an alternative spelling, but not the predominant spelling. The OED also says that attributive use (i.e. placed in front of another noun, to modify it) of carousel, as in carousel music, is chiefly AmE. Nevertheless, their most recent (2007) addition to the carousel entry in the OED On-line is BrE carousel fraud (a kind of scam to reclaim [BrE] VAT/[AmE] sales tax)--indicating that BrE speakers use it attributively too.

Going through my mental playground inventory, the only other dialectal difference that I can think of is AmE sandbox versus BrE sand-pit. But I suppose that this is as good a place as any to mention BrE bouncy castle versus (in my day) AmE moonwalk (or today) bounce house, even though they're generally not found on playgrounds everyday. The naming difference reflects the different ways in which these things are decorated and marketed. The bouncy castle is a big inflated thing that is usually shaped like a castle. Moonwalks tend to have space themes. I've found inflatable castle as an AmE term for the castle shaped ones as well. Apparently, there's some controversy about whether these things were invented first in the UK or the US.

Other business:
This is it! I've finally got to the end of the answerable queries from March! Now I'm only five months behind!As for tomorrow's appearance on Ant & Dec, it might be a blink-and-you-miss-it kind of affair. We spent at least an hour together taping yesterday (charming young men!), but I have no idea what they'll edit it down to. But here's the evidence that we have breathed the same air: 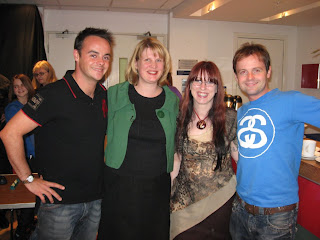 Ant, Lynne, fellow Scrabbler Kat, and Dec
(thanks to Stewart for the photo!)