Having seen an article about the UK's new "domestic abuse tsar", I tweeted

"Domestic abuse tsar" just doesn't sound like a title for someone who wants to do good things. https://t.co/UtdHXcuGr8

As you may have noticed from my 'mental health' diatribes, I have a particular sensitivity to compound nouns that rely on the reader/hearer to discern from context/cultural knowledge that the compound means sort of the opposite (another obsession) of what it is supposed to indicate.

This led Shane Street to ask: "Is there an AmE/BrE split over the use of czar/tsar?"

The answer is YES. The following GloWBE corpus table also shows that two countries particularly like to use Russian autocratic titles for government advisors: 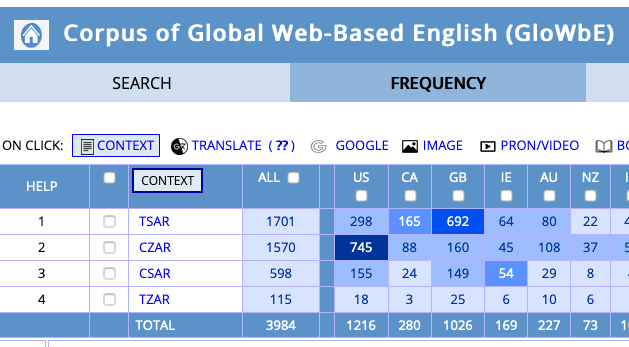 The GloWBE data is mostly from 2012. A search on the News on the Web corpus indicates that tsars/czars have been getting less common since 2010, when that ever-renewing corpus starts (despite Russian autocrats seeming more popular than ever with certain politicians).

Multiple spellings are often available in English for words that have been transliterated from another alphabet, in this case the Cyrillic Russian царь. It's not uncommon for different spelling variants to catch on in different places, as we've seen for yog(h)urt, for example.

The OED entry for this word has not been fully updated since 1915, but they did add the new government advisor meaning in 2001, noting that it is "Originally U.S."

Originally U.S. A person appointed by a government to recommend and coordinate policy in a particular area and to oversee its implementation. Usually with modifying word denoting the area of responsibility.1933   S. Walker Night Club Era 167   There are several versions of why Mulrooney quit the job to become the state beer ‘Czar’.1942   Amer. Observer 2 Feb. 8/1   From June 1940 until the recent appointment of Donald M. Nelson as war production czar, the American defense effort was best described in terms of red tape, delay, buck passing, and lack of authority.1959   Madison (New Jersey) Eagle 30 Apr. 1/1   New Jersey's newly-created ‘czar’ of transportation..announced Thursday night that he expected to have a solution to the commuting crisis worked out in from six months to a year.1977   Time Jan. 35/1   The job as energy czar will be Schlesinger's fifth Government post.1989   Economist 25 Mar. 47/2   Bennett's first move, after he was sworn in as his country's drug tsar, was to select Washington, its capital, as a test case for his new crusade.2001   Observer 25 Mar. i. 2/3   Equal pay ‘tsars’ will shame sexist employers into giving women a fair wage under a government action plan to root out workplace discrimination.

While some of the US examples are very early, it did seem to make its biggest splash in the 1970s, continuing into the 80s and 90s. The Corpus of Historical American English shows a lot of czars in the 1950s, but almost all of them are from historical fiction. During/right after the Russian Revolution, the tsar spelling seemed to do very well in AmE.

In the OED's examples, all the AmE spellings of the non-Russian sense are czar and, from the first BrE sighting in 1989, the BrE spellings are tsar.

To avoid the Russian referents, we can look for tsar/czar preceded by a noun. The corpora I'm looking at here are not strictly comparable. COHA is American English from lots of different sources (the Grampa Czars there are all from a piece of fiction), while the Hansard is the UK parliamentary record.  But at least they show what the two countries have had czars/tsars for and the recency of the UK's use of the term. 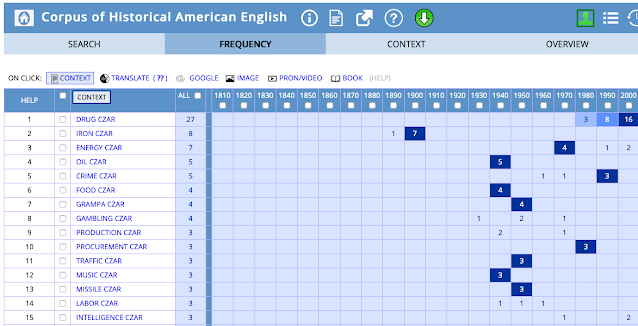 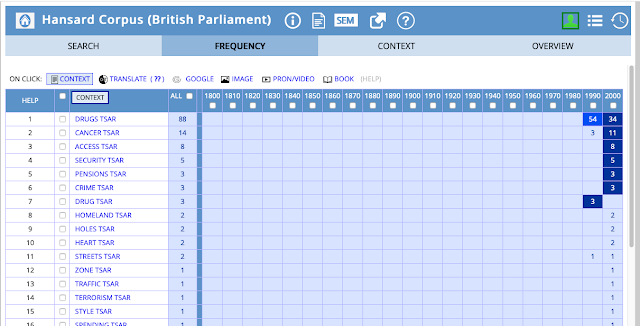 You can also see there the BrE use of -s plurals in noun modifiers (drugs tsar, pensions tsar, streets tsar), which AmE doesn't allow (drug czar).

Why czar/tsar? Why not king/queen or some other title? I'd assume that some of the reason is that the term is no longer in use for actual governors. King/queen are also very much used (at least in AmE) in commercial contexts, e.g. the Mattress King or Dairy Queen. This article (for which thanks, Tony Thorne) notes that tsar is "media shorthand". Perhaps the 'foreignness' and 'long-ago-ness' of czar/tsar also helps with the disconnect within the compound. A Mattress King is decidedly pro-mattress, so maybe a "Drug(s) King" would be too. Less familiarity with czars/tsars makes it easier not to read "Drug(s) Tsar" as "King of the Drugs".

One wonders, given the metaphors of the war on drugs and the war on terrorism that the leaders of the charges weren't called generals or admirals or field marshals or something.

Anyhow, I shall not be calling Nicole Jacobs the Domestic Abuse Tsar.  Her official title is worse, though: Domestic Abuse Commissioner. Like she COMMISSIONS DOMESTIC ABUSE. Please, no! Can we think of any better titles to offer her?

PS: answering questions from the comments, here's what happens when you look for "Russian czar/tsar" in the 2012 data:

And here's looking for czar/tsar with Ni* to get the name of a famous one: 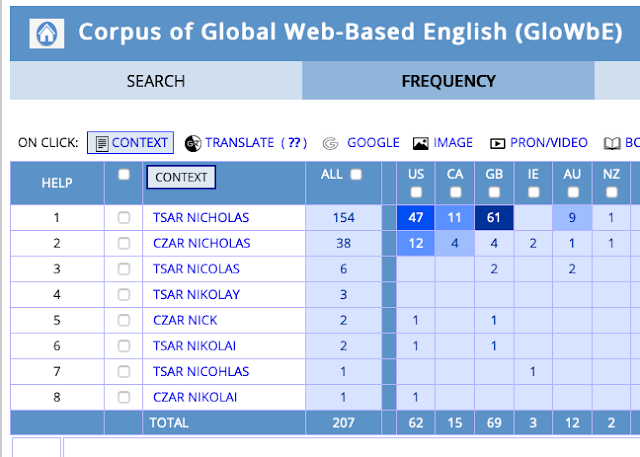 So, Americans (at that point at least), are using the ts- spelling more than the cz- spelling for actual monarchs. Perhaps it seems like a "more foreign" spelling so it's used for more foreign things—though you think any word starting with cz- would be seen as very foreign. But the cz- spelling is definitely AmE.